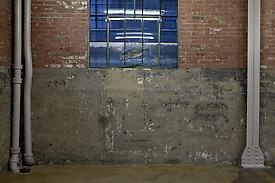 VIRGINIA OVERTON: "DELUXE" Opening Saturday January 14th, 2012 For Virginia Overton, the truck is a working tool embodied with stored labor. Rather than a symbolic object of desire in the mode of the co-opted muscle car, she recognizes the truck as a worker. Like most of her tools and materials, the truck functions as an agent for labor production. Overton once drove an old pickup truck from Norfolk, Virginia to Memphis, Tennessee. This act became a means for a sculptural gesture. Along the way she casually collected material found roadside, including: discarded lumber, furniture and other commodities drained of their use value. Arriving in Tennessee she invited friends to install work inside a borrowed RV that she rigged to her truck bed full of refuse. Taken together, the drive, the truck bed full of junk and RV installation allowed Overton to regard them collectively as an act of construction, retrospectively building her mode of working into new structures and practices. Ratchet straps, timber, ladders, commercial grade lighting and electrical fittings, are among the tools used in Overton’s intuitive sculptural arrangements. By balancing, wedging, suspending and cinching, a distillation of the working material occurs. It can be said that labor is crystallized in these objects of utility. The sculptures work and expend labor in an effort to create a new general utility. Similar to the firebrick of Carl Andre’s Equivalents or the slabs of lead and steel of Richard Serra, the materials are embedded with potential of returning to their origin of function. The rendered contingency of Overton’s provisional arrangements could easily be dispatched back to the construction site, trash pile or driven across the Texas ranch. Overton (born 1971, Nashville, Tennessee) lives and works in Brooklyn, New York. She received her BFA and MFA from the University of Memphis. She has been included in exhibitions at institutions including SculptureCenter and PS1 in Long Island City, NY; White Columns, NY; White Flag Projects, St. Louis; The Powerhouse, Memphis; and Le Magasin in Grenoble, France. She has exhibited at galleries including Blum & Poe, Los Angeles; Dispatch Bureau, New York and Air de Paris, Paris. She is represented by Mitchell-Innes & Nash, New York and Freymond-Guth, Zurich.