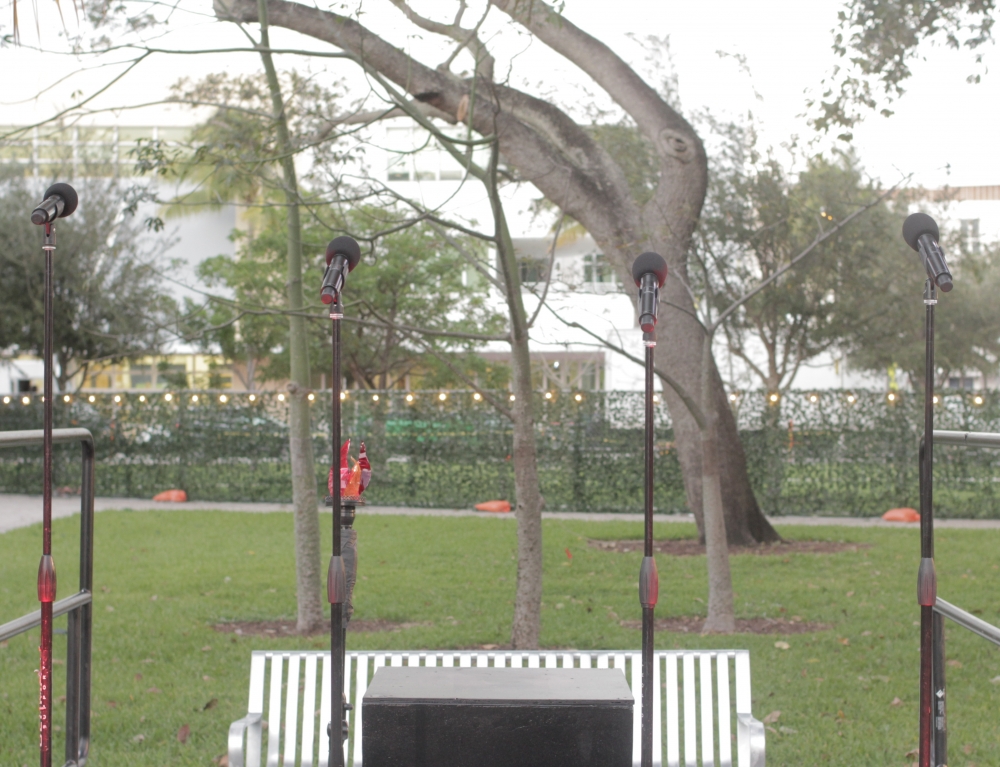 Mitchell-Innes & Nash is pleased to announce The Beautiful, a new choreographed crawl performance by Pope.L to be staged for the first time at the Public sector of Art Basel in Miami Beach 2015.  For The Beautiful, four men, dressed as Superman with skateboards strapped to their backs, roll onward in the dark. The rumbling of their wheels grows louder through speakers as they approach the crowd, and blends with the low churning of electric guitars. The ‘Super-Gents’ reach a wooden stage and crab-walk their way up, barely fitting onto the small surface. Holding each other, they finally break into a heart-rending, soulful version of the patriotic song America The Beautiful. In this elaborate production, Pope.L has conceived and directs a spectacle that is beautiful, sorrowful and terrible at once.

Pope.L is a multidisciplinary artist whose visual art and performance pieces confront issues of race, sex, power, consumerism, and social class. Among his best-known works are the “crawls,” a series of performances staged since 1978 in which he crawls for long distances through city streets. His seminal work, The Great White Way, 22 miles, 9 years, 1 street, was performed on Broadway Avenue in Manhattan from 2001 – 2010. The crawls represent an attempt to bring awareness to the most marginalized members of society.

Pope.L was born in 1955 in New Jersey.  He currently lives and works in Chicago, IL, where he is an Associate Professor in the Department of Visual Arts at the University of Chicago.  He has had solo exhibitions at institutions including the Art Institute of Chicago, the Carpenter Center at Harvard University, MOCA , Los Angeles, the Santa Monica Museum of Art, and the Kunsthalle Wien.  The MIT Press published a monograph to accompany The Friendliest Black Artist in America, his 2002-2004 traveling survey exhibition.  His work has been exhibited and performed at Museum of Modern Art in New York, The Whitney Museum in New York, Museum of Contemporary Art Los Angeles, The New Museum in New York and the Renaissance Society in Chicago.  Recent exhibitions and performances include Radical Presence: Black Performance in Contemporary Art at Contemporary Arts Museum Houston, Texas, (traveled to the Walker Art Center, Minneapolis; New York University’s Grey Art Gallery, New York, The Studio Museum, New York and Yerba Buena Center for the Arts, San Francisco); Flux This!  With Pope.L and Special Guests at Museum of Modern Art in New York, NY; and The Long White Cloud, Te Tuhi Gallery, Auckland, New Zealand.