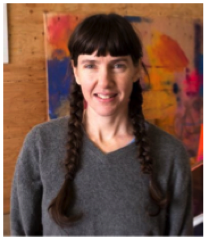 BOSTON, MA (January 10, 2013)—The Museum of Fine Arts, Boston (MFA), announced today that Amherst artist Sarah Braman is the recipient of the 2013 Maud Morgan Prize. Braman’s art transforms humble artifacts of life in the home and on the road––used furniture, car hoods, even a camper––with rich colors of sprayed paint or planes of cut Plexiglas that abstract the experience of the domestic haven or open road with transcendent, transporting hues. Evocatively titling her works, Braman is passionate that her engaging abstractions are always “about something ... beyond confines of language.” The MFA’s Maud Morgan Prize honors a Massachusetts woman artist who has demonstrated creativity and vision, and who has made significant contributions to the contemporary arts landscape. The Prize was established in 1993 in recognition of the spirit of adventure and independence embodied by noted New England artist Maud Morgan (1903–1999).
Braman will receive a $10,000 award and her work will be presented in the MFA’s Linde Family Wing for Contemporary Art in November 2013.
“We are pleased to honor Sarah Braman’s achievements with the Maud Morgan Prize,” said Malcolm Rogers, Ann and Graham Gund Director of the MFA. “Braman’s complex and poetic works speak powerfully to the spirit of the Prize, which celebrates the vision and thriving creativity of women artists residing in Massachusetts.”
Born in 1970, Braman grew up in Ashfield, Massachusetts, where she developed an early interest in art. She later enrolled in a summer program for high school students at the School of the Museum of Fine Arts (SMFA) during her junior year. She resides in Amherst, but also spends time in New York City, where she is a founder and co-director of the artist-run gallery CANADA, which opened in 2000. Her work has been exhibited in museums and galleries in the United States and Europe, including solo exhibitions at MACRO, Rome, Italy; International Art Objects, Los Angeles; Mitchell-Innes & Nash, New York; Le Confort Moderne, Paris, France; and the Armory Fair, New York, as well as group exhibitions including the 2010 Lisbon Biennial, the De
la Cruz Collection in Miami, and the Zabludowicz Collection Inaugural Installation in Sarvisalo, Finland. She received a BFA fromMaryland Institute College of Art, Baltimore in 1992 and an MFA from Tyler School of Art, Philadelphia and Rome in 1998. She will be part of the exhibition “Paint Things; Beyond the Stretcher” at the DeCordova Sculpture Park and Museum, opening January 27.

“It is with much gratitude that I accept the Maud Morgan Prize,” said Braman. “I am thrilled to be acknowledged by the MFA, where my passion for art was stoked as a teenager. An invitation to show in the Museum is an honor and one that is very personal for me. What a thrill to imagine that high school students coming to the MFA for the first time might encounter a sculpture of mine!”

Known especially for her sculptures, which combine used items with jewel-toned spray paint or translucent boxes upended at light-catching angles, Braman breathes new life into found materials. She has incorporated objects as diverse as a dirty desk, spray painted foam rubber, the roof of a truck, wooden doors, and a chrome vanity with highly formal, minimal, and clean elements like cast steel and brightly colored Plexiglas. The resulting works are carefully balanced compositions that bring a sense of discovery via disorientation as you move around their complex structures, at once delicate and powerful.
In the 2011 solo exhibition “Yours” at Mitchell-Innes & Nash in New York, Braman introduced a disassembled travel camper into her work. Once an innovative and omnipresent vehicle on American roads, the camper has fallen by the wayside in recent years. Braman fused the camper’s well-worn kitchen and bathroom, among other spaces, with Plexiglas, wood and metal, creating large- scale sculptures that evoke by-gone optimism or innocence in the pursuit of life on the road. The painterly addition of sprayed or brushed color to Braman’s works prompt the viewer to move around the structures in space, following the intuitive trace of the artist’s hand. 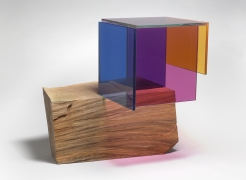