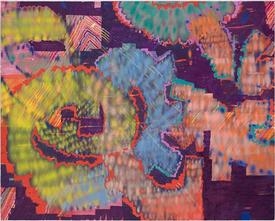 Keltie Ferris was born in Louisville, KY, and lives and works in Brooklyn, New York.  Recent solo exhibitions include Keltie Ferris: Doomsday Boogie at the Santa Monica Museum of Art, California, and Body Prints at Chapter, New York. Her works have been included in group exhibitions at institutions such as Contemporary Arts Museum of Houston, Texas; Brooklyn Museum, New York; and Indianapolis Museum of Contemporary Art, Indianapolis. She was recently awarded the Rosenthal Family Foundation Award in Painting by the Academy of Arts and Letters, where her work was included in their 2014 Annual Invitational Exhibition of Visual Arts.

School of the Art Institute of Chicago