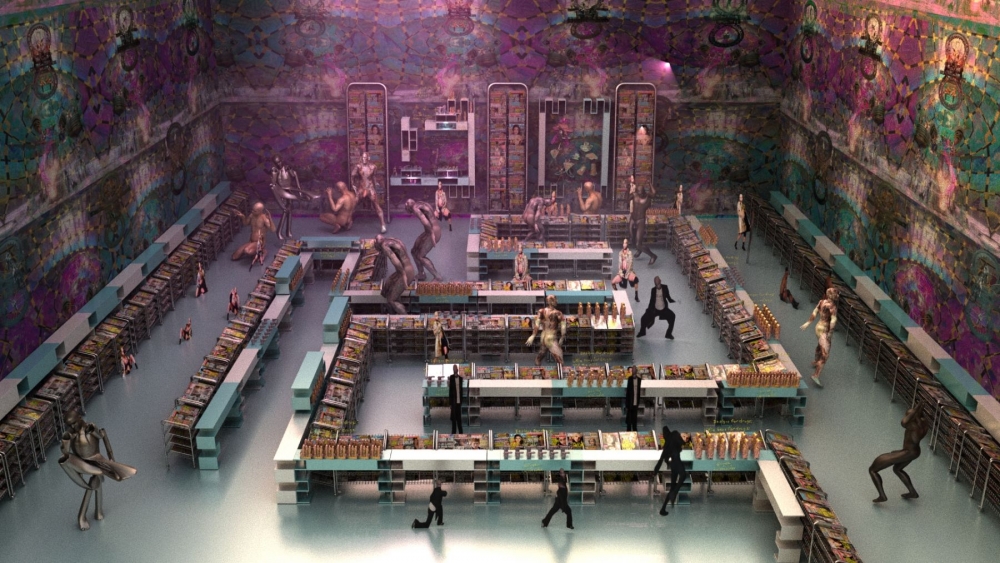 Jacolby Satterwhite’s first institutional solo show in New York, You’re at home revolves around his multipart, digitally-animated series Birds in Paradise. The exhibition manifests as an immersive environment of video projections, virtual reality, live performance, sculpture, and a retail store styled to resemble a defunct Tower Records. Inside of the store lies a newly released double LP album titled Love will find a way home by PAT—a collaboration between the artist and musician Nick Weiss. PAT takes the name from Satterwhite's late mother Patricia, who left behind hundreds of a capella recordings utilized on the album. 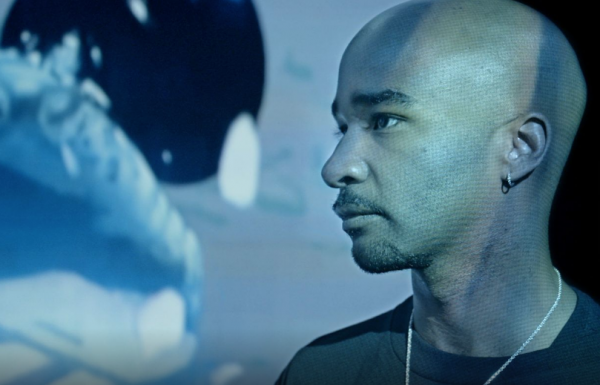 The Incredulity of Jacolby Satterwhite

How do we know what’s real? In the midst of career-marking solo exhibitions at Pioneer Works in Brooklyn and the Fabric Workshop and Museum in Philadelphia, artist Jacolby Satterwhite contemplates some of the most fundamental questions around the relationship between an artist and the works they create. 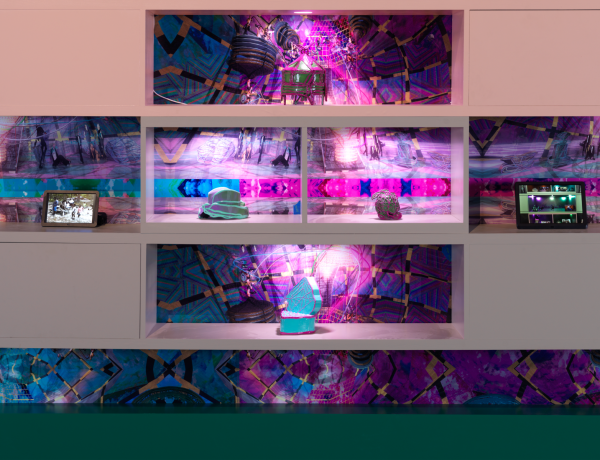 For the close of Jacolby Satterwhite’s exhibition You’re at home, the artist is joined in conversation with curator Thomas Lax to expound and reflect upon his digital animations, virtual worlds, and the 3D-printed sculptures that serve as their physical counterparts. The discussion will focus on the effect of Satterwhite’s digital work as well as the themes of the exhibition: American consumerism, pop culture, African folklore, ritual, and personal narratives, all of which are illustrated in Satterwhite’s visually eclectic animated series Birds of Paradise. This exhibition centerpiece and its thematic concerns speak in concert with the other work included in the exhibition. 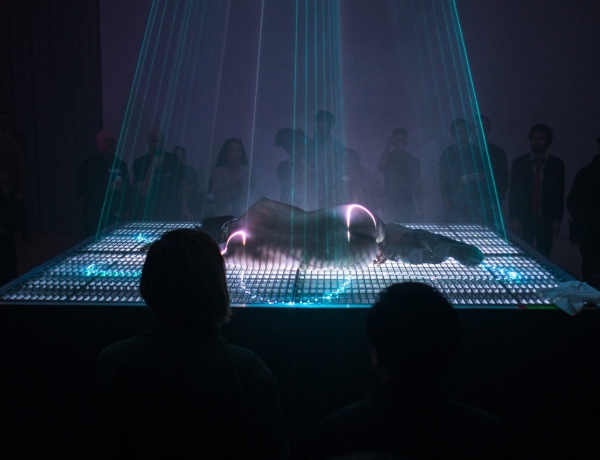 As part of Jacolby Satterwhite’s exhibition You’re at home, PAT—comprised of the artist and musician Nick Weiss (of Teengirl Fantasy)—will perform songs from the duo’s newly released double LP album, titled Love Will Find A Way Home. Within the album, a capella recordings of original songs left behind by Satterwhite’s mother Patricia are remixed and manipulated into propulsive, electronic dance tracks that feature a range of other collaborators. Utilizing the album soundscape as the auditory point of inspiration, the performance will synthesize live choral renditions and thematic light transitions into a holistic live-scoring of Satterwhite’s animated works, including the multipart series Blessed Avenue. Guests from the album will also make special appearances throughout the evening. 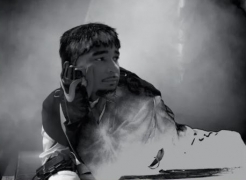 by Tiana Reid
Inside the Wild Universe of Artist Jacolby Satterwhite
The Nation November 22, 2019

I’m dramatic,” artist Jacolby Satterwhite tells me, tearing up, one Monday afternoon in the Red Hook neighborhood of Brooklyn. Two weeks before the opening of his solo show, You’re at home, at Pioneer Works, we’re sitting behind a desktop computer in his temporary studio, a floor above where his digital performances and 3D-printed sculptures will be exhibited. 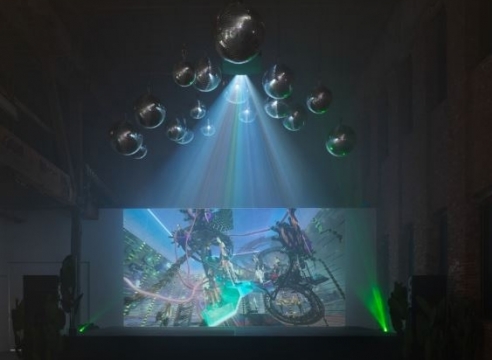 Imagine that all the works of Jacolby Satterwhite are the suspirations of a single, continuous world. A world in which everything flows and reality has assimilated the smooth transitions, bends, and breaks of dance music. A world where all things touch ends if you change their tempos enough and there are no hierarchies of scale or value. 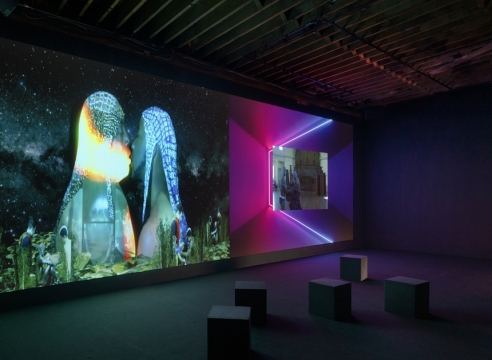 Patricia Satterwhite, too, was an artist without a public, without a means of access to the infrastructure and institutions that would have made her the star Jacolby says she dreamed of becoming. Before she died in 2016, she had lived with schizophrenia. Throughout her life she incessantly wrote pop lyrics in big letters on unlined white pages and sang them into a cassette recorder; she drew pages and pages and pages worth of inventions that she wanted to fabricate and sell on a home-shopping TV network. 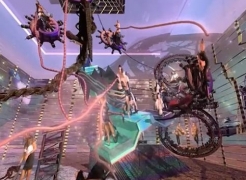 ‘I feel crazy,’ joked artist Jacolby Satterwhite after opening his first and second solo museum exhibitions, in two different cities, just two weeks apart. To realize his labour-intensive, hyper-baroque vision in ‘Room for Living’, at the Fabric Workshop and Museum in Philadelphia, and ‘You’re at Home’ at Pioneer Works in New York, Satterwhite had disappeared for several months from the New York queer scene in which he is a prominent fixture. 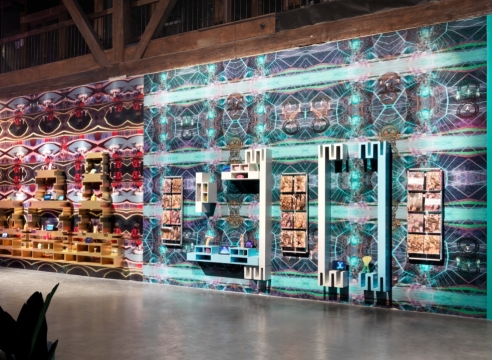 You may know Jacolby Satterwhite through his video animations that create immersive, queer, afro-furturistic worlds, or even from his collaboration with Solange earlier this year. However, his most recent exhibition “You’re at home,” a film installation revolving around the artist’s digitally animated series Birds in Paradise, gets more personal. 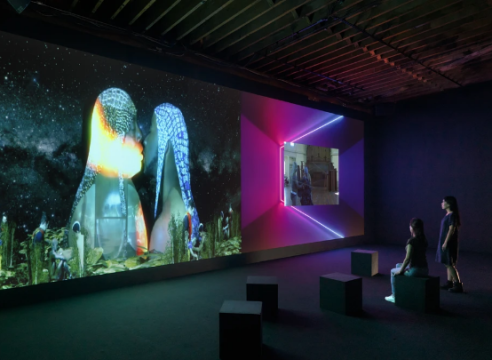 Be prepared for sensory overload when you step inside Jacolby Satterwhite’s new show at Brooklyn's Pioneer Works. Centering around his multi-part, digitally animated series Birds in Paradise, You’re at home is an immersive experience that includes video projections, virtual reality and sculpture. It even includes a retail store that sells records by PAT, his collaborative music project with Nick Weiss (of Teengirl Fantasy) which utilizes recordings by Satterwhite’s mother Patricia. 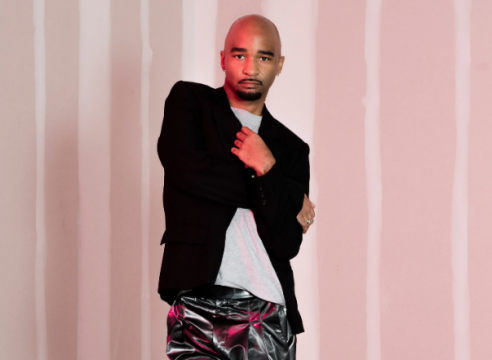 By Thora Siemsen
An Artist Who Works to Lana Del Rey and the Hum of Cable News
The New York Times Style Magazine October 10, 2019

Jacolby Satterwhite has spent the past decade making highly wrought digitally animated science-fiction worlds and irreverent modern dance pieces that draw on vogueing and martial arts. But he considers his two current shows, in New York and Philadelphia, to be “the final draft, conceptually, of what I was trying to say for years.” While Satterwhite has long been known as an art-world generalist, his fall exhibitions show him at his most direct 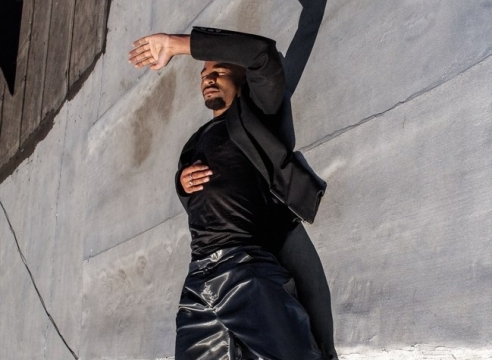 Goings on About the Town
The Wildly Ingenious Work of Jacolby Satterwhite
The New Yorker October 7, 2019

The sci-fi fantasias of Japanese video games, the pulsing bodies of E.D.M. raves, the mystical spaces of Nigerian shrines, and the bygone music chain Tower Records all figure into the wildly ingenious new work of the young American artist Jacolby Satterwhite (pictured). On Oct. 4, Pioneer Works, in Brooklyn, opens “You’re at Home,” an exhibition of digital projections, performances, sculptures, and music by the artist, who recently directed an animated music video for the singer Solange. 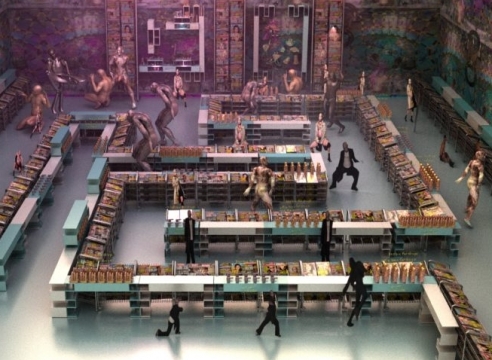 by Annie Armstrong
‘My Palette Is a 40-Gigabyte Hard Drive’: Jacolby Satterwhite on His New Show at Pioneer Works in Brooklyn
ArtNews October 4, 2019

Jacolby Satterwhite, the multimedia artist who recently collaborated with Solange, has long created intricate virtual worlds that burst with a vibrant vision of queerness. For a new exhibition, titled “You’re at home,” at Pioneer Works in Brooklyn’s Red Hook neighborhood, on view until November 24, Satterwhite is debuting a new work, Birds in Paradise, that puts onlookers into a kind of uncanny valley between the recent past and near future, fabricating a music shop in the same vein as the now shuttered Tower Records but that pulsates with larger-than-life dancing Afro-futuristic figures. 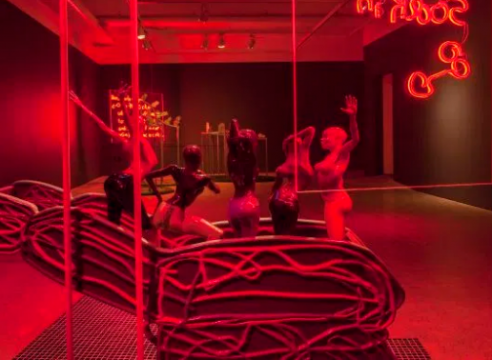 In artist Jacolby Satterwhite’s digital universe, the possibilities are immense. His decade-long practice has paid tribute to subjects as diverse as the Harlem ball scene, European art history, daytime tele-shopping, queer sexuality and African rituals, merging them into phantasmagorical fuchsia-colored dreamscapes where heaven and hell coexist. The Brooklyn artist’s intricately-crafted universe in 3-D animation, multimedia installation and digital print mixes his deeply personal ties to his mother and circle of friends with a large pool of references that are fascinating, seducing and triggering all at once.