Mitchell-Innes & Nash is pleased to present Embodiment, a group exhibition of works by Pope.L, Jonathan Lyndon Chase, Cheyenne Julien and Tschabalala Self that explores the different ways in which corporeality is envisioned and depicted within the spatial confines of the two-dimensional picture plane.

The body and its representations have often been used to give physical form to the intangible: a stand in, so to speak, for an emotion, an idea, a time or even an atmosphere. In sculptural and performative works, the viewer is able to observe the metaphors of the body in physical space from his or her perspective. However, on the flat surfaces of paintings, drawings and text-based works that use the body as subject, the perspectival becomes a matter of embodying someone else’s point of view.

With their renderings of bodies animated in dance, play and chore, Chase and Julien allow us to glimpse the dynamic experiences and rich inner lives of their subjects. Self, meanwhile, zeros in on the black female body as her subject and asks us to grapple with the respective social perceptions that foreground identity construction. Pope.L’s work in this exhibition, however, approaches the body through language in a series of text-based works known as Skin Sets. In these pieces, the body is delineated through the artist’s absurdist phraseology—people of color (blue, green, brown, black and gold) are situated within nonsensical spaces. Always puzzling and, at times, illegible, Pope.L’s Skin Sets make a comment on the legibility and visibility of alienation, especially as it concerns the body in space—a performance that negotiates between self-definition and definition of the self by others.

The works in this exhibition show, through the respective viewpoints of its authors, not only the spaces inhabited by real or symbolic figures but also the complex and multidimensional identities, ideals and anxieties embodied by them. In this, there is in each of these works the incarnation of the “other­”—an image of alterity that, paradoxically, is also a mirror that reflects back on the viewer. The worlds we see through these distinct, flattened windows are and are not, at the same time, our own.

Pope.L (b. 1955, Newark, NJ) is a Chicago-based visual artist and educator whose multidisciplinary practice uses binaries, contraries and preconceived notions embedded within contemporary culture to create artworks in various formats, for example, writing, painting, performance, installation, video and sculpture. Building upon his long history of enacting arduous, provocative, absurdist performances and interventions in public spaces, Pope.L applies some of the same social, formal and performative strategies to his interests in language, system, gender, race and community. The goals for his work are several: joy, money and uncertainty— not necessarily in that order.

Pope.L will be the subject of a trio of complementary exhibitions in New York this fall collectively titled Instigation, Aspiration, Perspiration, organized by the Museum of Modern Art, the Whitney Museum of American Art and Public Art Fund. Recent exhibitions, performances and projects include One thing after another at La Panacée, Montpellier (2018); Flint Water Project at What Pipeline, Detroit (2017); Whispering Campaign at documenta 14, Athens and Kassel (2017); Claim (Whitney Version) at the 2017 Whitney Biennial (2017); Baile at the 32nd Biennal de São Paulo (2016); The Freedom Principle at ICA Philadelphia (2016) and MCA Chicago (2015) and Trinket at The Geffen Contemporary, Museum of Contemporary Art, Los Angeles (2015).

Jonathan Lyndon Chase (b. 1989, Philadelphia, PA) is known for his figurative paintings that highlight the complex nature of identity construction in contemporary society by centering the existing but often overlooked tenderness that finds form in the everyday. Chase’s abstracted and dream-like depictions of queer black men serve to tie the corporeal with the psychic, structuring the interiority of his subjects and their environments in ways that capture a range of emotions from joy to melancholy and offering up the suggestion of unconditional love for, from and between these characters. Apart from painting, Chase’s practice also encompasses drawing, collage and sculpture, and his work can be found in the permanent collections of the Whitney Museum of American Art, New York; Institute of Contemporary Arts, Miami; the Pennsylvania Academy of Fine Arts, Philadelphia; the Wedge Collection, Toronto; and the Woodmere Art Museum, Philadelphia. Chase has had solo exhibitions at Kohn Gallery, Los Angeles (2018); Company Gallery, New York (2018); and has been included in notable group exhibitions including Punch, curated by Nina Chanel Abney, at Deitch Projects, New York (2018) and Reclamation! Pan-African Works from the Beth Rudin DeWoody Collection at the Taubman Museum of Art, Roanoke (2018).

Cheyenne Julien (b. 1994, Bronx, NY) uses portraiture to convey quiet yet powerful moments of affliction, humor or pensive fascination, while using the body to negotiate a way of seeing that engages both the narrative of her personal experiences and the collective history of the larger world around her. Despite the cartoon-like features of her subjects, Julien imparts an undeniable and exuberant realism to anxiety, fear, happiness and contemplation. Avoiding an overtly politicized didacticism, the artist’s paintings and drawings are instead reflective, focusing on the effects of trauma rather than its causes. Cheyenne Julien received her BFA in Painting at the Rhode Island School of Design in 2016. Recent solo and two-person exhibitions include Cheyenne Julien & Tau Lewis at Chapter New York, New York (2018) and Homegrown at Smart Objects, Los Angeles (2017). Julien’s work has also been included in group exhibitions at Gavin Brown’s Enterprise/Unclebrother, Hancock (2018); Almine Rech Gallery, New York (2018); Karma, New York (2018); Loyal Gallery, Stockholm (2017); and White Cube Bermondsey, London (2017).

Tschabalala Self (b. 1990, Harlem, NY) is a New York-based figurative painter who uses the black female body as her primary subject. These figures, or “avatars” as she is known to call them, are often situated within the familiar public spaces of everyday life, such as the corner bodega or a neighbor’s front stoop. In other works, her figures are shown floating in space, staring defiantly back at the viewer. Self’s canvases are noteworthy for its sewn elements, often incorporating fabrics and furs—a practice that is tied to the artist’s memory of her mother and the emotional and physical labor traditionally associated with women. Self’s work often upturns the conventions of the feminine ideal, wary of adding to the myth of the ideal female body. Her paintings of bodies accentuate identity as it is formed and affected by not only race but also by the spaces, both symbolic and physical, it inhabits. Tschabalala Self received her BA in Studio Arts at Bard College, Annandale-on-Hudson (2012) and her MFA at Painting and Printmaking from the Yale School of Art, New Haven (2015). Recent solo exhibitions include Bodega Run at Pilar Corrias Gallery, London (2017), which traveled to the Yuz Museum, Shanghai (2018); Tramway, Glasgow (2017); Parasol Unit Foundation for Contemporary Art, London (2017). Self’s work has been included in recent group exhibitions at Crystal Bridges, Bentonville (2018); James Fuentes, New York (2018); Foxy Productions, New York (2018); Kohn Gallery, Los Angeles (2017); and the New Museum, New York (2017). 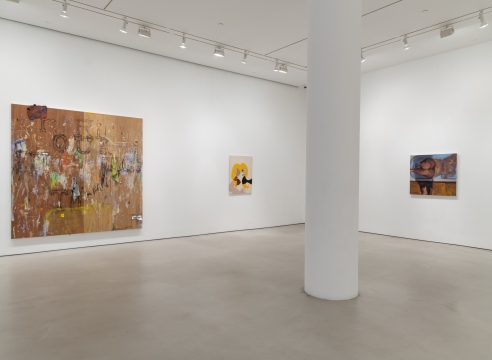 by Andrea K. Scott
Goings On About The Town: Embodiment
The New Yorker October 21, 2019

The Chicago-based adept Pope.L is a triple threat in New York this fall, with concurrent shows at the Whitney and moma and a recent Public Art Fund performance for which some hundred and fifty participants put their bodies through punishing paces, re-creating one of his legendary mile-long crawls. Pope.L’s Manhattan gallery pays homage to his body-centric concerns in this dynamic exhibition, which combines text works from his series “Skin Sets” with paintings by a trio of young rising stars: Jonathan Lyndon Chase, Cheyenne Julien, and Tschabalala Self. 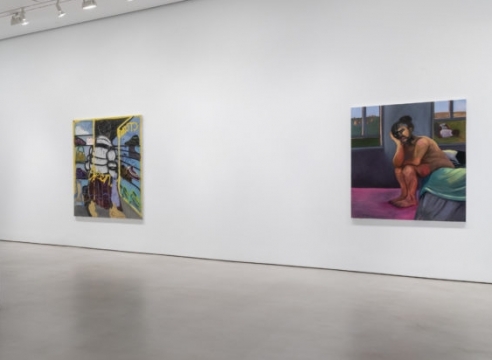 This sensuous group show brings together works by Pope.L, Jonathan Lyndon Chase, Cheyenne Julien, and Tschabalala Self to explore the various ways the concept of “corporeality” can be captured in two-dimensional spaces.  The options are plentiful: there are the highly personal physical experiences of the body (in play, at rest, at work) in the creations of Chase and Julien alongside Self’s powerful depictions of the black female form that challenge and engage society’s role in constructing identity with one’s own body, as well as those of others. This sense of physicality need not even be visually manifest—Pope.L’s absurdist text series “Skin Sets” employ nonsensical phrases to reference people of color (blue, green, brown, black, and gold), which play with mental associations regarding race and visibility. 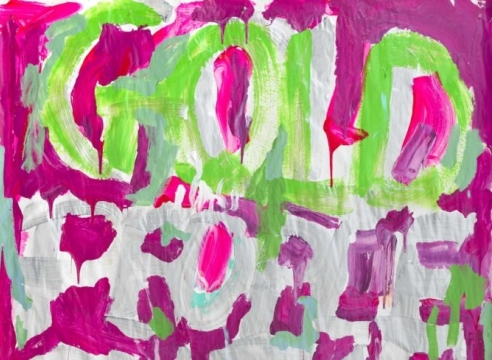 “’Embodiment’ came together about a year ago, when I started thinking about the exaggerated body [in relation to] architecture and familiar public spaces in urban neighborhoods, like the bodega, for example, or the stoop,” Blair explains. “I’ve always been really interested in the expression of figuration, and I love language, having worked with it [as a writer].” 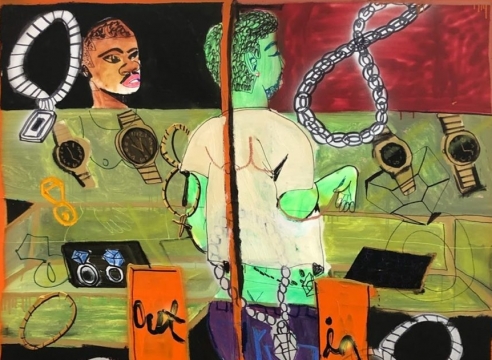 by Caroline Goldstein and Sarah Cascone
21 Gallery Shows You Won’t Want to Miss in New York This Fall, From Amy Sherald’s Star Turn to a Historic Cuban Artist’s US Debut
Artnet News September 3, 2019

This group show of all-stars from the gallery roster explores the concept of the body, how it is envisioned, lived, and depicted through two-dimensional art. Each of these artists approach the body in a distinct way, underscoring the fundamental sameness of every body.