Norbert Schwontkowski: Ångstrœm November 19, 2009 – January 9, 2010 October 2009 – Mitchell-Innes & Nash will present an exhibition of new paintings by German artist Norbert Schwontkowski from November 19, 2009 – January 9, 2010 in their Chelsea space. This will be the artist's first solo exhibition in New York, and his second show with Mitchell-Innes & Nash. Poetic, atmospheric, and loosely narrative, Schwontkowski's new paintings depict the artist and his world in a way that is at once cartoonish and melancholy: a curvilinear building in "Musée des Arts" playfully references contemporary museum architecture while seeming to come to life. In "Artist," a Chaplinesque creature made of collaged black and white orbs dances before a curtain created by a swath of red paint. Many of the paintings allude to electrical charges: another reference to the artistic process, as "spark" is a metaphor for creation. The title of the show is taken from the name of physicist Anders Jonas Ångström, after whom a unit of measurement for light waves was named. The name can also be read as a pun on both the German words "angst" and "flow [electricity]". Schwontkowski's paintings are made with hand-ground pigments and paints, into which he mixes various materials to yield different textures. His palette of pale earth tones, blacks and grays creates a muted, subdued atmosphere, while his carefully worked surfaces and minimal gestures demonstrate his engagement with the history of painting. Norbert Schwontkowski was born 1949 and grew up in Bremen, Germany. He is a professor of painting at the Hochschule für Bildende Künst at Hamburg. He has regularly exhibited in galleries and public institutions throughout Europe since the late 1970s. His recent retrospective "Kino" traveled to Brandenburgische Kunstsammlungen Cottbus, Kunsthalle Erfurt, and Kunsthalle Bremen (2004-2005). He was also the subject of a special exhibition at the Rubell Collection in Miami in December 2005. He was included in the 2005 Berlin Biennial. His work is represented in museums including the Solomon R. Guggenheim Museum in New York and the Museum of Fine Arts in Boston. He is represented in Germany by Contemporary Fine Arts, Berlin and Produzentengalerie, Hamburg. Listing Information: Mitchell-Innes & Nash Chelsea is located at 534 West 26 Street, New York, NY 10001 Gallery Hours: Tues-Sat, 10am – 6pm T: (212) 744-7400 www.miandn.com Opening reception: Thursday, November 19, 6-8pm Press Information: Mamie Tinkler T: 212.744.7400 E: mamie@miandn.com Caption: Musée des Arts, 2009, oil on canvas, 39 by 35 ½ in. 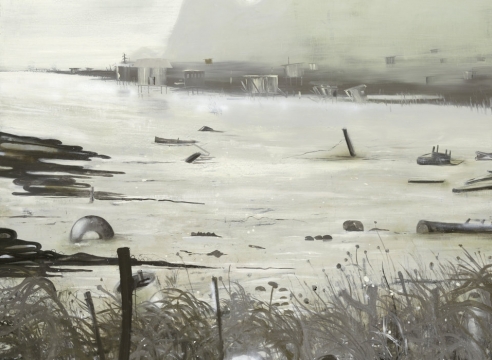