A conversation between artist Karl Haendel and Leah Levy, director of The Jay DeFeo Foundation, moderated by Claire Gilman, chief curator of The Drawing Center, on the occasion of Karl Haendel & Jay DeFeo: Pink Cup and The Facts at Mitchell-Innes & Nash, NY
September 12, 2017

Mitchell-Innes & Nash is pleased to announce Pink Cup and The Facts, a two-person exhibition of works on paper by Karl Haendel and Jay DeFeo, on view at 1018 Madison Avenue from September 12 through October 14. The exhibition highlights the importance of drawing in each artist’s practice as well as the varied potential of the medium itself. This will be the gallery’s second exhibition of each artist and the first time the two artists will be exhibited together.

The exhibition is an exploratory dialogue between the work of two artists dedicated to the particularities of making drawings. In the process of forming the exhibition, Karl Haendel traveled from Los Angeles to The Jay DeFeo Foundation in Berkeley to spend time immersed in Jay DeFeo’s drawings, examining the range of marks, evidence of pencil hardness, effect of varied pressure, composition, and diverse subject matter in DeFeo’s work, communing with those details through the lens of his own deep experience with the medium.

Along with her dexterity across diverse mediums, including painting, photography, photocopy, and collage, Jay DeFeo (1929-1989) consistently devoted herself to meditative and labor-intensive graphite works on paper. The familiar and iconic forms in DeFeo’s oeuvre appear across subject matters and periods, including works from the Tripod, Pink Cup, Compass, and Reflections of Africa series, in which DeFeo found meaning in the studied repetition of a transmuted form over many years. Often in centrally focused compositions, the drawings can have a ghostly quality, as though the depicted object seems to appear and disappear alternatively.

While Karl Haendel’s (b. 1976) work includes drawings, installations, films, and public projects, he is best known for the production of large, labor-intensive pencil drawings, which are often presented in installation form. His work uses drawing to discover connections and affinities between seemingly disparate nodes of cultural data, drawing attention to the overlaps between the social, the political, and the personal. Through formal manipulation and repacking of pre-existing imagery, Haendel explores how our culture uses images to produce opinions, values, and beliefs and how the images we produce reflexively re-shape these frameworks.

On view in Pink Cup and The Facts are drawings by DeFeo made between 1977 and 1989 selected by Haendel, alongside works by Haendel from 2008 through 2017. One of DeFeo’s most enduring formal preoccupations is that of the fold or drape: a draped fabric head-covering, an emanating tissue, or elements of layering in collage. She frequently returns to the form in works such as Seven Dwarfs: Happy, van der Weyden, and in graphite drawings from the Reflection of Africa series, using the fold to transform a quotidian object into a kinetic abstraction that transcends its source image. Similar in form, Haendel’s work Tax Return (Crumpled) tackles the problem of rendering three-dimensional folds on a flat surface, though his choice of subject matter not so much transcends as points outwards towards broader social or political concerns. The work pictures many individual’s most obvious and resented relationship to the government, while also recalling President Trump’s unprecedented refusal to release his own tax returns.

Similarly, a formal affinity links Haendel’s The Facts (in a Rice Cake) (2017) with DeFeo’s Untitled (One O’clock Jump series) (1978): a central, circular composition with a tightly drawn surface that sharply gives way to bare periphery. DeFeo’s work is abstract and mysterious, recalling a moon or a lens to another world.  Haendel’s work is superficially legible, but its legibility only invites further questions: what are ‘the facts’ and how can this elusive concept exist within a puffed rice snack?

Despite the differing framework by which each artist engages the viewer, an enduring similarity emerges. Labor, time, and repetition combine to create a ritualized act of drawing and their devotion to the medium becomes a meditative act. 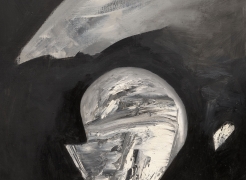 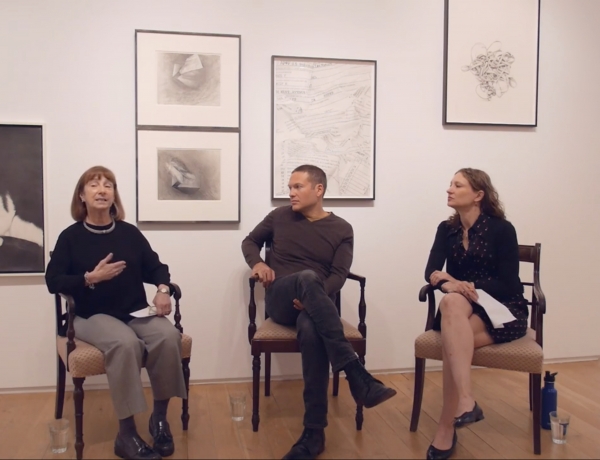 A conversation between artist Karl Haendel and Leah Levy, director of The Jay DeFeo Foundation, moderated by Claire Gilman, chief curator of The Drawing Center, on the occasion of Karl Haendel & Jay DeFeo: Pink Cup and The Facts at Mitchell-Innes & Nash, NY. 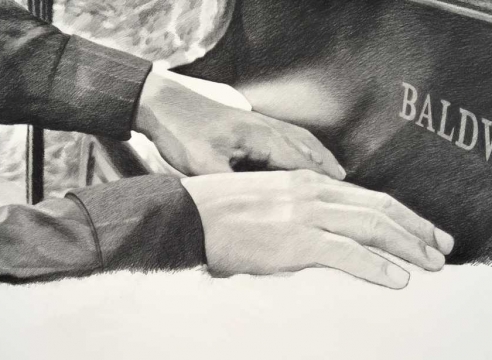 This will be the gallery’s second exhibition of these artists and the first time the two will be exhibited together. The exhibition showcases the relation between the works of the artists which are based on the process of making drawings.