NEW YORK, July 15, 2014 – Mitchell-Innes & Nash is pleased to announce Justine Kurland: Sincere Auto Care, on view at our Chelsea location from September 4 – October 11, 2014.  This will be the gallery's third solo exhibition of Kurland's work, and will coincide with a group exhibition curated by Justine Kurland at our 1018 Madison Avenue location titled Days Inn.

Kurland has become known for her utopian photographs of American landscapes and the fringe communities, both real and imagined, that inhabit them.  For her last exhibition at the gallery, The Train is Bound for Glory (2009), Kurland spent two years driving through the expansive American West documenting trains in open vistas and the subculture of train-hoppers and drifters around them.  The 2007 series Of Woman Born, also photographed on the road, features unclothed mothers and their children whom Kurland met and befriended along the way.

For her most recent series, Kurland returns to a purely documentary style in the tradition of Walker Evans.  Cars, the culture of the mechanic and the open road are Kurland's subjects, drawing on her twelve years of experience with life on the road.  The photographs in Sincere Auto Care balance two competing narratives: the car as an aspirational symbol of freedom, sex, the American Dream, and the bleaker daily life behind the scenes.

With this body of work, Kurland presents a reality where utopia and dystopia are not polar opposites, but rather fold together in an uneasy coexistence.  The formal elegance of the photos and Kurland's eye for teasing romance and beauty out of her subjects gives rise to a sense of detached optimism, or as Kurland herself describes, a place "where beauty is found not because the world is beautiful but because it is beautifully described".

About Justine Kurland
Justine Kurland was born in 1969 in Warsaw, New York. She received her B.F.A from School of Visual Arts, NY in 1996, and her M.F.A. from Yale University in 1998. Her work has been exhibited extensively at museums and galleries in the U.S. and internationally. Recent museum exhibitions have included "Into the Sunset: Photography's Image of the American West" at the Museum of Modern Art, NY; and "Role Models: Feminine Identity in Contemporary American Photography" at the National Museum of Women in the Arts in Washington, D.C. She was the focus of a solo exhibition at CEPA in Buffalo, NY, in 2009. Her work is in the public collections of institutions including the Whitney Museum, the Guggenheim Museum, and the ICP, all in New York; the Corcoran Gallery in Washington, DC; and the Museum of Fine Arts in Montreal.

Join the "Justine Kurland" conversation on social media by mentioning @miandn and using the #JustineKurland hashtag when posting. 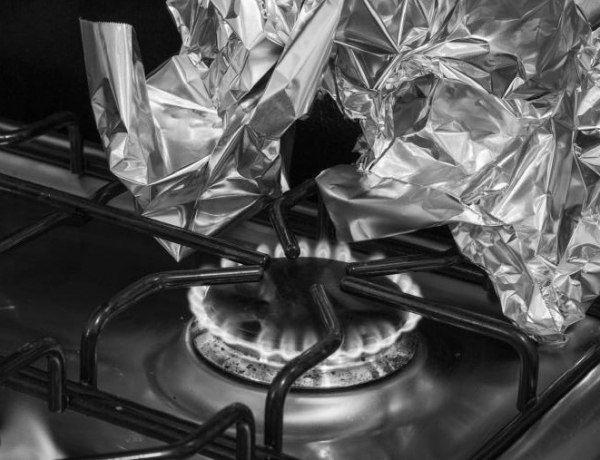 In a true collaboration, Justine Kurland and John Yau shared photographs and poems throughout the making of Black Threads from Meng Chiao, each reacting to the work of the other many times over. 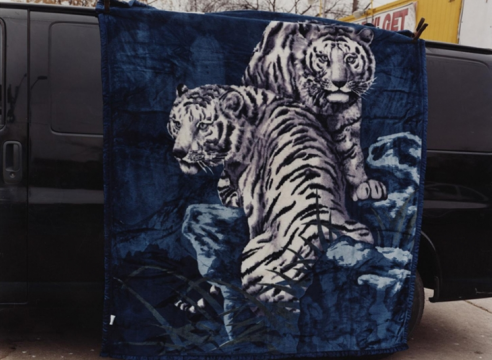 The new body of work is (partly) about America’s so-called “love affair” with the car, which in Kurland’s hands becomes as complex a relationship as any real couple could have: There’s real affection, but also MADness (as in, Mutually Assured Destruction). In this photo, the couple have got to the point where they’re dressing the same, but the man’s embrace is also a taking apart. (Turn the picture sideways and they start slow dancing.) Kurland’s subjects have often been sentimental: Her love affair with her little tyke, for instance, and their Rootabaga Story adventures among the trains that made the West. But what’s crucial is that she treats her motifs without sentiment. (Courtesy the artist and Mitchell-Innes & Nash, NY)

Titled “Sincere Auto Care” with demotic aplomb (the new series of work is named after an actual auto body shop in Nebraska), Kurland’s exhibition functions, according to the gallery press release, as an exploration of American car culture and the enduring fantasy of the open road. But, in our time, the once robust cruiser-ideal of Ford and GM has given way to massive layoffs and killer ignition switches, while the epic adventure of Easy Rider has downshifted to survival of the fittest in The Rover. In theaters and on the street, Manifest Destiny has shed its rosy-cheeked utopianism for a grizzled dystopian pallor. No wonder its exhausted face shows up repeatedly in Kurland’s photos looking feral, meth-addicted, and unemployed.

A photographer who started out as a fantasist—staging scenes of young girls escaping together into idyllic landscapes—has turned into one of our most talented realists. Kurland remains a storyteller, and her new work combines engaged photojournalism with a sure feel for its narrative possibilities. Her latest pictures, of wrecked cars, auto-repair shops, and mechanics, reflect her recent years on the American road, usually in the company of her son, who shows up here as the youngest member in a cast of rough-and-ready guys. Kurland’s take on masculinity is an ideal balance of appreciation and critique. With no women in sight, the automobile becomes the focus of all erotic attention. Through Oct. 11.

"It was equally jammed at Mitchell-Innes & Nash, where Justine Kurland was showing modest new photographs taken in and around auto-body shops she has visited while driving a car old enough to need frequent servicing." 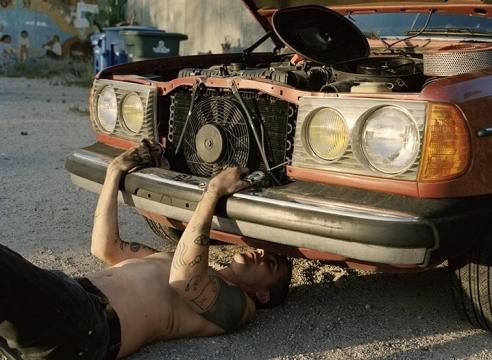 At Mitchell-Innes & Nash, art-world gypsy-photographer Justine Kurland exhibits pictures of mechanics and garages taken all across this country. None of them are composed in your typical boring art-world format, around one person, usually of one ethnic, racial, sexual, or economic type, or one variety of object — tools, buildings, vehicles, electric chairs.

Cheerios in the hands of a mechanic dressed in ripped jeans, the inner abstract geometry of an engine exposed within an open hood, a dead bird elegantly held upside down by one leg, the frenetic beauty of a smashed window – all these and more are the images one experiences in the vivid photography of Justine Kurland for her solo show, Sincere Auto Care. The narrative format of the photos express the feelings of freedom and of the mundane surrounding this truly American phenomenon evokes. Kurland presents the predominantly masculine culture that surrounds the sexy, freedom inducing American dream of “the car”. But within the small details, one notices perhaps a romantic delicateness that underlies this world.

In her new series, “Sincere Auto Care,” on view at Mitchell-Innes & Nash, Kurland again offers observations from her travels; this time documenting—with a nod to Walker Evans—cars, mechanics, and the freedom of life on the open road. Photographed across the U.S. over the course of the last three years, some 35 photographs find beauty in the characteristically bleak: a gritty hand or dangling roadkill; a shaggy-haired “junkie” in Tacoma; a tattooed mechanic, tucked under the body of a Mercedes 280 Coup; a driver holding a gleaming Cadillac wheel with wire spokes. All that, as she says, exist in a place “where beauty is found not because the world is beautiful but because it is beautifully described.” 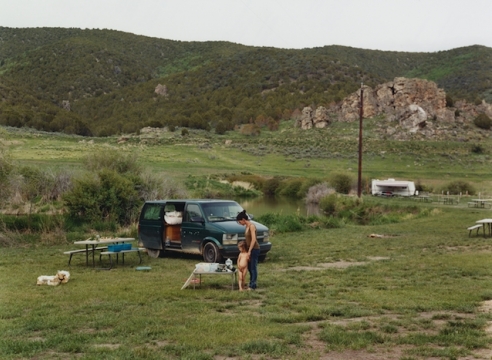 John Yau and Justine Kurland discuss Kurland's most recent body of work, Sincere Auto Care, and the relationship between photography, poetry and narrative. 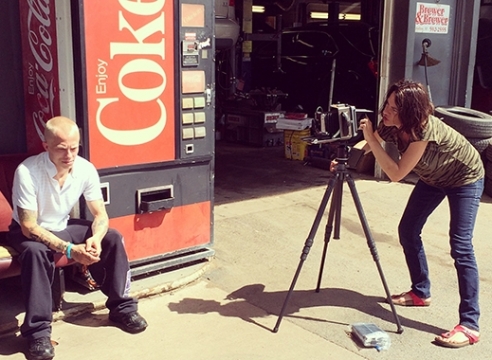 Ashton Cooper from Blouin Artinfo asks Justine Kurland about her two current exhibitions at Mitchell-Innes & Nash, her practice and her inspiration. 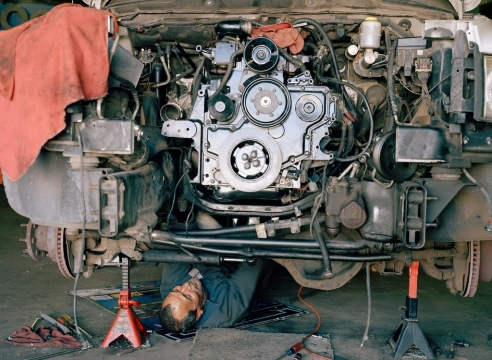 For more than a decade, Justine Kurland has taken photographs during annual cross-country journeys from New York to the Pacific Northwest that reveal the double-edged nature of the American dream. A lifelong nomad (she grew up traveling to Renaissance festivals, where her mother sold hand-sewn clothes), her tools are her 4×5 camera and her van, which allow her to dwell, briefly, in the worlds of the marginal figures she photographs. First, there were the girls she cast as runaways, forging into forests and swimming holes. Later came images of commune members in wilderness idylls and panoramas of westbound freighters and the hobos who ride them.