Mitchell-Innes & Nash will present an exhibition of works by the German neo-Expressionist painter A.R. Penck in its Chelsea space from May 5 through June 17. The show will include seven major paintings from the 1980s and 90s, including examples of lesser-known works rarely seen in New York. The exhibition is produced in collaboration with Michael Werner Gallery, New York and Cologne. Beginning in the 1960s, A.R. Penck developed a signature visual language that combines a rough, unpolished painting technique and all-over composition with primal imagery and heavily symbolic content. A variety of visual references in the paintings on view at Mitchell-Innes & Nash show Penck’s approach to diverse subjects. From an animal’s head, to a hunter with his prey, to a modern-day man and woman, the images indicate a play of ideas between primal urges and socio-political topics. A.R. Penck was born Ralf Winkler in 1939 in Dresden, Germany, where he witnessed the fire-bombing of his native city as a young boy. He was exiled from East Germany in 1980 and expatriated to West Germany. The political and cultural rift between the two countries has figured prominently in his art. Penck first came to prominence in the United States in the 1980s. His paintings, drawings and sculptures have been exhibited widely in museums and galleries throughout Europe and the U.S. His works are in the permanent collections of many museums, including the Museum of Modern Art, New York, the Tate Gallery, London, the Museum of Contemporary Art, Chicago, Neue Nationalgalerie SMPK, Berlin, and the Centre Pompidou, Paris. He was included in the 1984 Venice Biennale as well as in Documenta V, VI, VII and IX. He is currently based in Berlin and Dublin. Listing Information: Mitchell-Innes & Nash Chelsea is located at 534 West 26th Street between 10th and 11th Avenues. Gallery Hours: Tues-Sat, 10am – 6pm T: (212) 744-7400 www.miandn.com Opening Reception: An opening reception will be held at the gallery on Friday, May 5 from 6-8pm. Press Information: Stacy Bolton Communications T: 212.721.5350 E: Mamie@StacyBolton.com 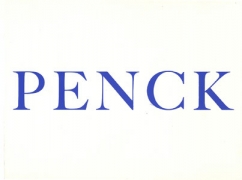